Etna Rosso San Lorenzo comes from 8 hectares of vineyards in the district of the same name in the municipality of Randazzo. In some plots the vines are more than 70 years old, the altitude is 750 meters above sea level, the soil is almost pure volcanic ash.
The terroir of Contrada San Lorenzo was originated from lava flows and volcano-clastic deposits related to the effusive and explosive activity of the Elliptic volcano approximately between 60,000 and 15,000 years ago. Although very young in geological terms, the Elliptic soil is the oldest surface layer where it is possible to plant in the appellation. The reason is simple: millennia of lava flows have buried the oldest soils, leaving, in fact, only small and rare portions of the soil of the Elliptic. On the north side of Etna there are five or six Contradas that have “elliptical terroir”. Three of them, however, are spurious, as the igneous nature of the Elliptic is mixed with alluvial soils of a sedimentary nature due to the overflow of the Alcantara river. On the north side of Etna only three Contradas are “pure” elliptical terroir: Bocca d’Orzo, Calderara and San Lorenzo.
San Lorenzo is the Contrada that marks the North West border of the D.O.C. Etna and therefore has the coldest climate of the D.O.C. This climate combined with soils especially rich in ash, creates a unique and unrepeatable combination. Wines that at the same time enclose vigor and generosity in a sumptuous tension. Purebred wines. 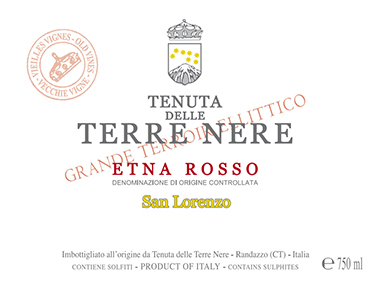