The soils of Calderara Sottana are easily recognizable, even at a glance. Of all the crus of the Etna DOC they are certainly the stoniest. So much so that in some areas you can’t see the ground from the stones that cover it. Fist-size, light, a mix of black pumice and basalt.
The word itself, Calderara, recalls heat, probably born from the warmth that the black stones retain and transmit back to the earth on cold nights.
The terroir of the Contrada Calderara was originated from lava flows and volcano-clastic deposits related to the effusive and explosive activity of the Elliptic volcano, approximately between 60,000 and 15,000 years ago. Although very young in geological terms, the Elliptic soil is the oldest surface layer where it is possible to plant in the appellation. The reason is simple: millennia of lava flows have buried the oldest soils, leaving, in fact, only small and rare portions of the soil of the Elliptic. On the north side of Etna there are five or six Contradas that have “elliptical terroir”. Three of them, however, are spurious, as the igneous nature of the Elliptic is mixed with alluvial soils of a sedimentary nature due to the overflow of the Alcantara river. On the north side of Etna only three Contradas are “pure” elliptical terroir: Bocca d’Orzo, Calderara and San Lorenzo.
The altitude varies from 600 to 700 meters. The harvest takes place in the second ten days of October. Locally Calderara and its wines enjoy an extraordinary reputation. Our Calderara Sottana is the result of very old vineyards, from 60 to 100 years of age. Of all our crus it is perhaps the most complete: just as a wide-angle lens includes the widest panorama, so our Calderara seems to contain and exhibit the widest spectrum of flavors, aromas and nuances. Distinctly autumnal, spicy, it is aromatic and austere at the same time. It gives a wonderful sensation of fullness on the palate, but ineffably light.
Don Peppino, whose devotion to Calderara drove him to cultivate its vines for 70 years, describes Calderara’s wines well: “creamy”, he called them. And he was right. Noble poultry, white meat ragù, pork loin, pork in milk, rabbit in white wine, lamb in the oven. 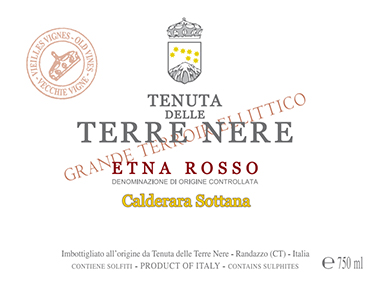