For centuries and centuries the northern slopes of Etna have been recognized for the best red grapes in the area; so much so that white grapes have never been planted here, (except for a small percentage mixed with red ones to lighten the powerful red wines).
“This is why I have established the Tenuta delle Terre Nere here. Some specific areas of the eastern and southern areas of Etna, due to ancient and recent history of excellence in viticulture, already attracted me a lot. In short, I became particularly interested in the viticulture of the smallest municipality in the eastern area, Milo. From the 18th century until a dozen years ago only one company existed in Milo, and it was famous for its whites. And when in 1968 the statute of the D.O.C. Etna was established, only the whites of Milo were allowed to carry the “Superiore” denomination. In fact, as I see it, the microclimate of Milo makes the production of red wines unlikely, while that of rosé wines interesting, and that of whites potentially admirable even if it requires a very special attention”. Marco de Grazia
The rainy average in Milo is double that of the northern and southern areas. His exposures are mostly east facing, often made difficult and shady by vast ravines. The steepness of the terraces of the entire municipality sees the sun forcibly setting very early in the shadow of the volcano. Furthermore, the climate is very humid, open as it is to the hot scirocco wind which, after crossing the Ionian Sea, blows directly on the vineyards. So much so that it is not uncommon to find yourself shrouded in fog even on summer evenings. No, it is not a climate for red wines. But an extremely interesting, albeit demanding one, for whites, who seem to appreciate its particularly fresh, humid and breezy nature.
“Finally, last year (2019) I managed to purchase a small but beautiful property. I was looking for the perfect altitude: not too high, to avoid a really too extreme climate; nor too low, where excessive heat would defeat the austere and acute character of the Milo wines that I had learned to admire. It also had to be well exposed to ensure consistent quality in such a difficult climate. The property had both. And now, after twenty years of neglect, and the dry stone walls patiently rebuilt by hand, it is ready to produce captivating wines again. While waiting for the vineyard to bear fruit, I feel I can offer you my vision of a Milo white from grapes selected by excellent winemakers I have known for years: a sharp, slender, austere and aristocratic wine – another example of the wonderful Etnean diversity”. Marco de Grazia 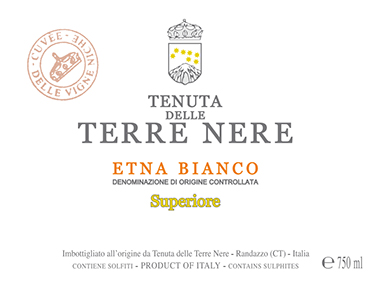