Unlike our Etna Bianco DOC, which is made up of an assembly of 5 white grapes, the “Vigne Niche” selection is only Carricante.
“I decided to produce it in 2007, after having been lucky enough to taste a 42-year-old Carricante on two separate occasions. This wine turned out to be so beautiful, so impeccable and vigorous despite its Friday age, that I was moved to try to produce something similar. I tried to imagine how an evidently talented winemaker had produced such a wine, moreover virtually without any technological help. And I tried to imitate what I had imagined. The “Vigne Niche” selection is the result. ” Marco de Grazia
Then came 2014. An important vintage: seven years earlier we had planted Carricante vineyards on our side, the north one, historically dedicated exclusively to great reds. The great quality of the grapes, combined with the vigorous age of the vines, has allowed us to broaden the spectrum of taste with the production of two white Crus: an opportunity that came at a very favorable moment, given the success of the Cuvée delle Niche vineyards 2013.
After all, as for the reds, arriving at the production of the white Cru is the culmination of a dream, however pursued in a scientific way: from separate vinification to the understanding of which grape was adequate, which soil and what work was necessary to arrive at long awaited production.
The two white Crus from the Northern area, denominated with the Contradas of origin, respectively Calderara Sottana and Santo Spirito, are composed of Carricante from old and young vines, as to find excellent Carricante in an area of ​​the DOC mainly dedicated to reds it’s not easy.
The wines are fermented and aged in 10-hectolitre barrels. They are wines whose rare complexity and structure bloom wonderfully over time. Of great longevity, they will reward your patience with a beauty of unusual nobility.
Unlike Calderara Sottana, this wine has a more open and exuberant nose – thanks to the generosity of the huge amount of volcanic ash characteristic of the Contrada. If the Calderara Sottana is a tenor, the Santo Spirito is more a soprano: the freshness is more accentuated, as is the spring vivacity, floral and rich expression of its very fine nature. 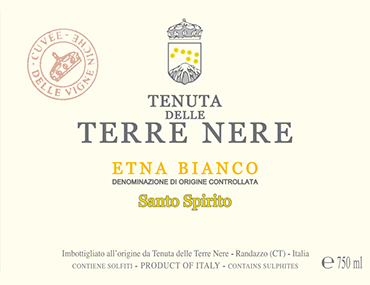